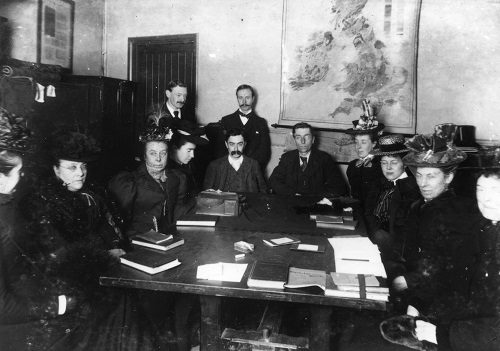 In the second part of our new blog series, Eleanor Sier, Heritage Learning and Participation Manager at Toynbee Hall, shares some stories of some the most interesting individuals she’s come across so far.

A question I recently posed to them on Twitter was who were Kate and Lucie’s Top 10 Toynbee-ites (people who lived or worked at Toynbee Hall)? It was a fun question but also so enlightening about the people I had yet to discover in Toynbee Hall’s history.

Kate said that Rosetta Reardon was definitely in her Top 10. Mrs. Reardon, as can be read in Kate’s paper here, started at Toynbee Hall as a cook but later became involved in the Girl Guides at Toynbee Hall and established lunch clubs here. She remains Toynbee Hall’s longest serving worker, either paid or voluntary. Kate also mentioned novelist Maisie Birmingham, whose husband was Warden from 1963-1972. She wrote a crime novel set in Toynbee Hall’s Citizens Advice Bureau.

Two people who would be on both our lists are Alice Lascelles and Theodore Wassilieff, known to his students as “the Maestro”. They were Toynbee Hall’s ballet teachers from 1937-1951. Wassilieff had danced in the Imperial Russian Ballet and had partnered Anna Pavlova. There are some wonderful photographs in the archive of “Maestro” and Alice dancing.

Dr. J.J. Mallon, Toynbee Hall’s longest serving Warden from 1919-1954, and described once as the “most popular man east of Aldgate Pump“, was also on Kate’s list. The list of campaigns and committees that he was involved in during his life was extraordinary and his influence on social policy was potentially vast but as yet, no one has published a biography of him. Kate also mentioned E.S. Watkins, a residential volunteer and Poor Man’s Lawyer (Later named the Free Legal Advice Centre) volunteer who drafted the Hire Purchase Act (1938) for Toynbee Hall, who Kate is currently researching

Lucie suggested Margaret Nevinson and her husband Henry, a couple forced to marry due to pregnancy. Our founder Canon Barnett encouraged them to come and work in the East End. They both taught here for a short period when Toynbee Hall first opened and went on to lead fascinating lives. Lucie also listed Thomas Hancock Nunn, social reformer and one of the first residential volunteers, plus the Spender brothers, Harold and John Alfred, who both came here as residential volunteers and worked as journalists, leaving descriptions of life at Toynbee Hall.

One who Lucie listed, who’s story is one of my favourites is Thomas Okey. He started out attending classes at Toynbee Hall whilst working as a basket weaver. He then became a tutor here in 1892, and organised trips to Europe for his students as part of the Toynbee Travellers programme. By 1919, aged 67, he was Professor of Italian at Cambridge University. Finally Lucie drew my attention to the snippets given about Toynbee people through the First World War obituaries, as written about in her blog post here.

Learning about the lives of the people who have been involved with Toynbee Hall from its inception up to today is the thing I enjoy most about my job. And that this project will give Toynbee Hall the opportunity to shine a light on some of these people who, up until now, history has ignored or forgotten about, is hugely satisfying.

I hope this blog will prompt people to share their knowledge and memories of Toynbee Hall with me as the history is so huge I won’t be able to uncover it on my own! Contact me via archive@toynbeehall.org.uk