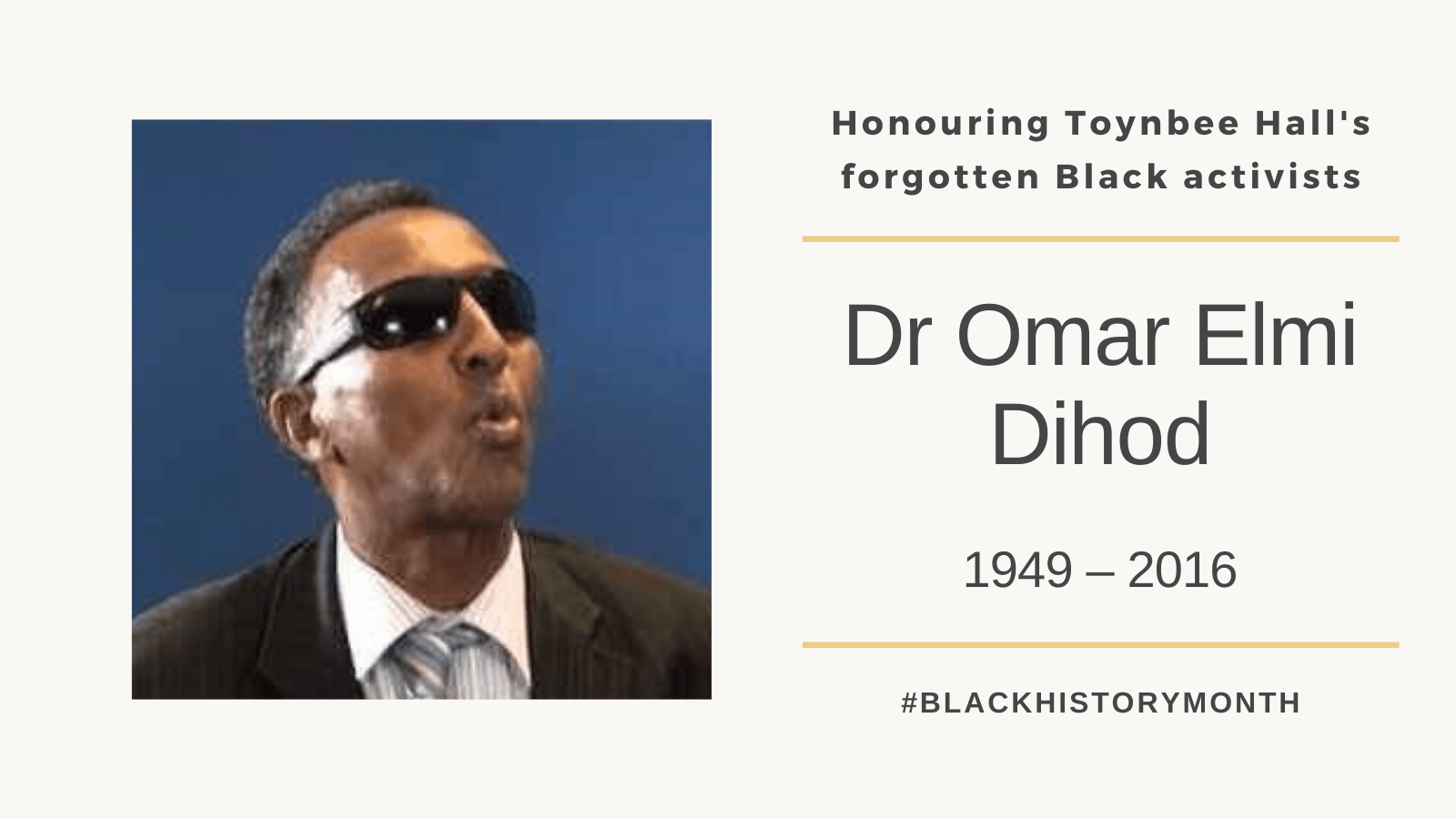 Toynbee Hall has a long and proud history of striving for and achieving positive social change for the people of East London and beyond. Since we were founded in 1884, many individuals and organisations have passed through our doors and made invaluable contributions to the community. As part of Black History Month, we want to celebrate the achievements and impact of Black activists throughout our history.

To our great shame in our archives as in so many historical records, the achievements and contributions of Black staff and volunteers are barely documented. We want to be able to share the stories of the many Black people who have worked in our community whether at a community, grassroots or policy level to progress human rights and dignity for all people and particularly for Black people. We want our archive to accurately celebrate that, not just this month but forever. We have been working hard to research, record and recognize the work of women and People of Colour at Toynbee Hall and have found records of three Black men who ran important organisations from Toynbee Hall that improved the lives of immigrant communities in London. One is Dr Omar Elmi Dihod.

Dr. Omar Elmi Dihod was born in Somaliland in 1949. In the 1960s, Somaliland unified with Somalia but in 1969, the country was sieved by the military junta of President Siad Barre. Dihod was conscripted into the Barre’s large military in the 1970s and educated in St. Petersburg at a Russian military medical school due to an allegiance between the two countries. Dihod went on to become one of Somaliland’s few psychiatrists.

By the 1980s, Barre had killed tens of thousands of Somalilanders and destroyed the country’s infrastructure, leaving people to flee. Like many, Dihod came to the UK where he continued his training as a Clinical Associate at The Maudsley psychiatric hospital in South London. After his training finished he established The Somali Counselling Project in December 1986 at Toynbee Hall. The project provided translation, advice and treatment to Somalians and people from the Horn of Africa living in London. His colleague at The Maudsley who worked with him on the project, Dr. Anthony Pelosi, remembers how hard it was establishing a new organisation and the support they got from Toynbee Hall on how to fundraise and write an annual report. A description of the project can be read on page 23 of Toynbee Hall’s Annual Report for 1987-88. A paper on the project was published in 1989 in the Psychiatric Bulletin and a pdf of it can be downloaded here.

It records the challenges some Somali people were facing in the UK at that time resulting in poor mental health. Dr. Perlosi remembers Dr. Dihod also trained NHS colleagues on Somali culture such as the use of natural stimulant kaht and the treatment of wadado. This resulted in improved care for Somali people receiving NHS treatment and his pioneering work probably continues to influence services today.

However, what Dr. Dihod is best known for is helping to establish the liberation movement SNM: the Somali National Movement. One Toynbee Hall employee remembers coming to Toynbee Hall in the 1980s for regular meetings led by “Dr. Omar” to update London’s Somali population on the SNM’s work. After the SNM overthrew Barre in 1991, Somaliland split into fighting factions. Dihod will always be remembered for being one of the leaders who pacified Somaliland when it declared its unilateral independence from Somalia. You can hear Dihod speaking about this time in an interview here.

Dihod passed away on 2 April 2016 in Hargeisa, Somaliland, where he had become an advisor to the President. His work to improve the lives, especially the health of Somali people living in London and in Somaliland will not be forgotten.

If you knew Dr Dihod, benefited from the Somali Counselling Project, or was involved in any of Toynbee Hall’s projects at the time, we would love to hear more from you. Please get in touch by emailing archive@toynbeehall.co.uk