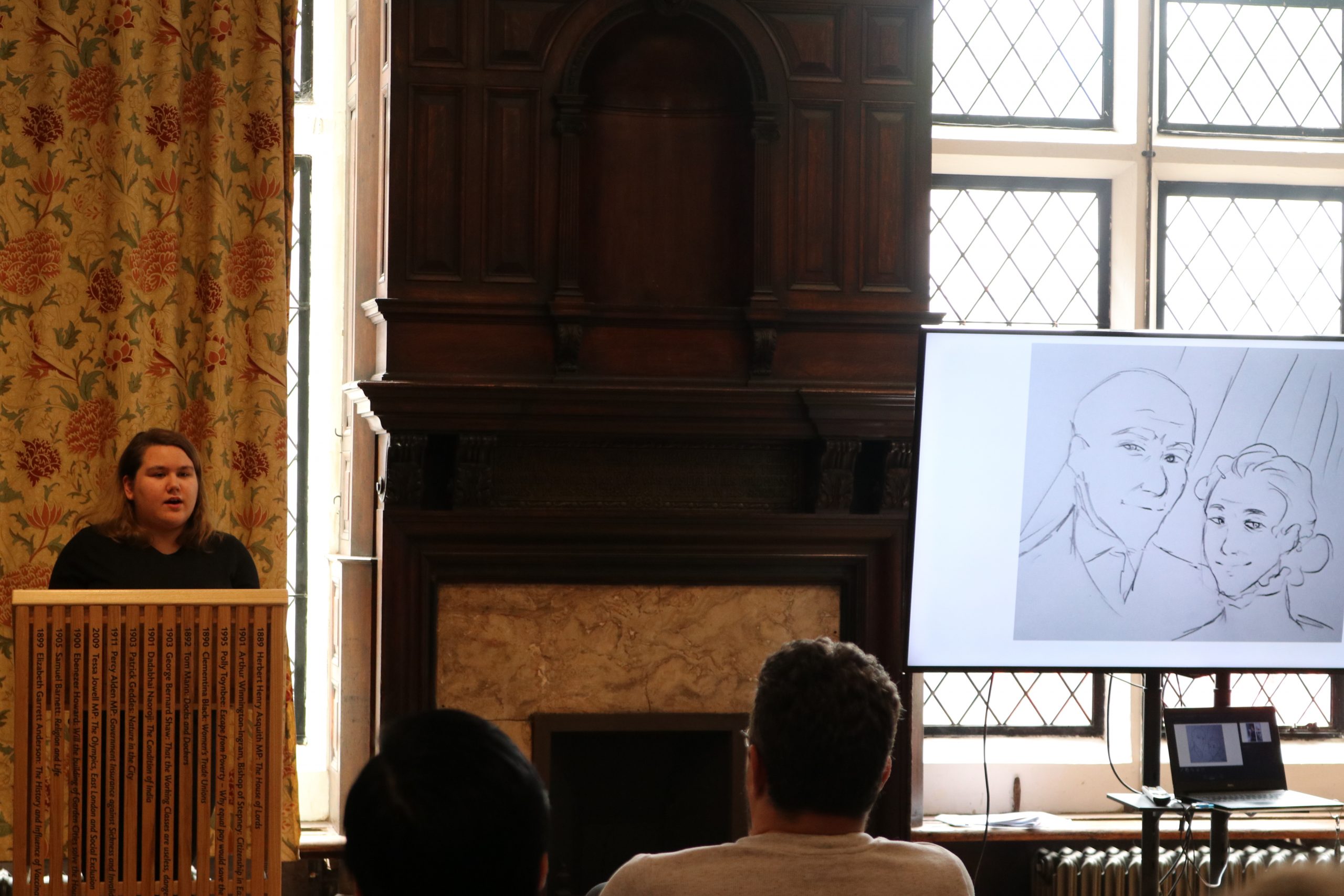 17-18 year old students from New VIc College have performed an anthology of their own creative pieces at a showcase event at Toynbee Hall.

This anthology is a celebration of New Vic College’s students highly original responses to Toynbee Hall and its historical archives. This follows a unique collaboration between Toynbee Hall and London Metropolitan Archives (where the archives are housed) culminating in the Ordinary Voices Extraordinary Stories Creative Clinic attended by 17-18 year old contributors from New VIc College’s extra-curricular History society led by Alan Kunna.

This material was shared in a live public performance at Toynbee Hall on 18th May 2019 as part of London Metropolitan Archives Word on the Street festival.

Here are some the pieces created and performed at the showcase:


A Man Unkown by Marija Hamza

This piece was inspired by a photo that I looked at during the Toynbee Hall workshop. The photo consisted of the residents at Toynbee hall at the time posing for a picture and there was an unknown face in the background, and no one has been able to identify him. I felt that this was a good platform, as I could create a story about him. In the picture there were also men who I felt brought character to Toynbee, for example one of the men, Thomas would box in the garden and I felt that, by including this reference, I was acknowledging the brilliant history of Toynbee and the lives of the people who lived and made the history of the building.

He awoke, and there was nothing left inside, but a raw emptiness that gnawed at his insides like a ravenous rat. His eyes were threaded crimson and his eyeballs weighed heavily in their sockets. His whole body hung limp like each limb weighed twice as much as it had before and just moving it about was a slow, excruciating effort. The sun still excelled in the sky, but not for him, the birds sang in eruptions of melody, but not for him, for him, there was no beauty left in the world. He glided across the whiny floor boards like a slinking panther. He gracefully dragged his body to a door marked with T.H, stunningly engraved in it, that was scratched and injured with fragmented chocolate varnish. It had a brass coloured lock and door knob dulled with age and greasy finger-marks.

He clutched the doorknob with his milky, raw and calloused hand, and twisted the cold metal realising a tender, squeaky noise into the atmosphere and allowed himself into the shrinking room. His onyx eyes skimmed the room like a predator. His lifeless, eyes landed on a candle. The flame burnt neatly amid the dusty wax. It sat inside a golden handle holder. He reached out to touch the exquisite object. His fingers gracefully grazed the burning metal, yet his ruby painted hands were not affected in the slightest. He rotated his elevated frame towards the mahogany desk that looked fresh and unharmed. The smell of the new wood floated into his sore nostrils. He gazed out of the ancient mullioned window that cast a checker board of dazzling midday sunlight onto the dark walnut floor. He peeked outside into the flourishing garden. His primitive gaze landed on two well-built men who were boxing in the beaming sun. His intense gaze captured an animalistic punch that one of the men had thrown. He zoomed in on the victim of the vicious punch and felt a twinge of sympathy for him. The floor boards screamed for release as he began to relinquish his weight again. He drifted out of the room leaving the melody of the floor boards behind him.

He suddenly came to a halt as a shrill doorbell rattled the hall way. The tormenting sound was then heard again but this time slightly more strangled. Further down the hallway he heard a man cry in fury before he felt the floorboards clatter with uproar. The man stalked towards him with fury clouding his taciturn, metallic eyes. He felt a stab of fear, but it was washed away as the man continued to stalk past him, as if he hadn’t seen him. He continued with his journey down the rigid hallway and made his way down the timber steps as they played a tune for him. He walked into a bulky group of men and tried to ignore the relentless snapping and the optimistic flashing light. He lurked in the shadowy corner shying away from the pessimistic sunlight. He turned to escape the scene, and was met with hickory eyes that were as rich as the earth’s soil; pools of dark-cinnamon swirls. But the gaze of this man was unsettling as he looked through him and not at him, as many of the other men had that day.

He turned to see what had peeked the man’s interest, and was met with the sight of a dusky coffin. He crept towards the casket and was met with an unsettling sight. He was laid beautifully in his forever-home. His pale skin soaking up the sun beams that ricocheted off the Victorian windows. His glasses laid softly on his sharp nose, his eyes closed peacefully, and his mouth turned up into a sinister smile that sent shivers through his ghost form. He looked down at his appearance and saw that his hands were coated in crimson liquid, the pungent smell finally reaching his nose making his intestines twist in agony. He read the only sign that laid above his coffin,

I was born and raised in East London. My mother is from is from Serbia and my father is from Bosnia. Because of their unlikely pairing and terrible history, they decided to rewrite their story and come to England, with the finest form of transportation. A mango crate. I try to embrace my heritage as I feel that it gives me character.

My name is Zak, I’m a student at Newvic College. I was inspired to write this poem by the importance of Toynbee Hall in the 19th and 20th century. It was unique, in that it was a ‘political playground’ for the ideas that would dominate politics in the future, such as the welfare state. Major politicians like Clement Attlee resided here for short times. It seems a centre of rationality in the midst of a chaotic era, and that is what this piece is focusing on.