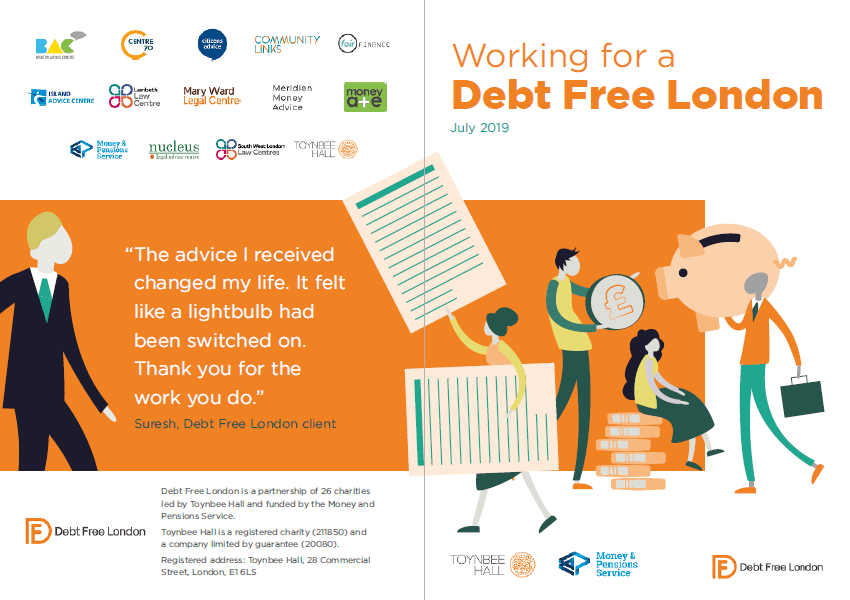 Debt Free London, a partnership of 26 advice charities across London led by Toynbee Hall, launches a new report on Tuesday 16th July which highlights the extent of problem debt in London and the issues that they are dealing with most frequently.

The report shows that 90% of the 25,000 Londoners helped by Debt Free London last year said that their debt has negatively affected their health. Cases are rising in complexity, leading people to get further into difficulty, increasing the people’s need for more assistance to understand their options, and leading to widespread anxiety and stress.

Across its 26 partners which include law centres, community organisations, charities and advice providers, Debt Free London helped over 25,000 people last year and saw demand for advice reach record levels as the number of over-indebted people in London reached an estimated 1.6 million.

Another cause for major concern is that the two most common issues people came to the partnership to seek help for last year were Council Tax and rent arrears, which are both priority debts. Over a third (34%) of respondents are behind on these.

Debts classed as ‘priority’ carry extremely serious repercussions such as the threat of bailiffs, homelessness or even imprisonment. In total 15% of our clients had a visit from bailiffs – most often, as a result of council tax bills (23%).

Matt Dronfield, Head of Debt Free London, recently said in a report by the Mayor of London:

“Huge numbers of Londoners live every day with problem debt. They might face arrears for punishingly high rent or for council tax; or struggling to pay off high interest loans, store card or credit card bills; owing money to friends and families who have helped out; or a combination of all these things. It is a bleak picture, with huge consequences for ordinary Londoners and their families such ill health and the risk of homelessness. Living with anxiety and the fear of a knock on the door from a bailiff is significantly hurting the health of Londoners.”

“Clearly, one of the biggest issues we face is helping those who fall into financial difficulty. When people struggle with debt it can be overwhelming, and it’s vital they have access to the right support and advice to help them manage their finances.

One thing I recognise and value is that – this partnership has the people they serve right at the heart of their services. I know this at the work they do helps to make a real difference to the lives of those who are affected by financial difficulties, something this report helps shine a light on.”

“Worrying about problem debt can have a devastating impact on a person’s mental health and wellbeing and it is simply not right that millions of Londoners, many of whom are in work,  are having to rely on credit cards and short-term loans simply to get by.

“Though the statistics are sobering, Debt Free London is a great example of how charities can work together to begin to fill the gap in support for those burdened by debt and feeling isolated, and help them navigate their financial difficulties and find light at the end of the tunnel.”