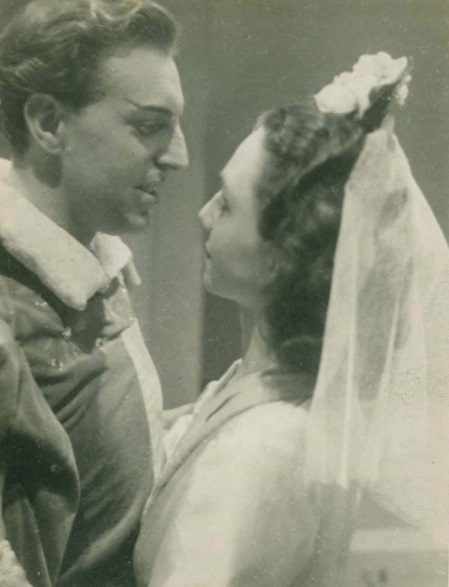 *Photo taken during performance of Romeo and Juliet at Toynbee Hall in 1939, donated by Jack Miles

In this Valentines Day special edition of our Heritage Blog series, Eleanor Sier, Heritage Learning and Participation Manager at Toynbee Hall, shares some stories of romance and how Toynbee Hall has brought people together.

I’m lucky enough that this is the third large-scale Heritage Lottery-funded project that I have had the pleasure to work on. These projects are exciting as not only do they create opportunities for local communities to engage with historic buildings in their area, but it also allows buildings of historical significance to be restored. These buildings usually have some architectural merit, but what they always have is significance for people. They hold a place in the social history of our country.

It is fascinating reading about Toynbee Hall’s history as a powerhouse for social change. But as a social historian, what I get most excited about are the personal stories, what Toynbee Hall means to individuals. Sadly I will never be able to ask Clement Attlee, William Beveridge or Jane Addams exactly what their time at Toynbee Hall meant to them and how it impacted on their futures. But I have been able to hear stories from people of how Toynbee Hall supported them through a difficult time, or how it allowed them to learn a creative art form, which went on to be a lifelong passion, and for some set them on their career path.

However, as its Valentine’s Day, I thought I would share a few stories of love at Toynbee Hall that I have come across.

Historian Richard Pankhurst (son of Sylvia) worked briefly at Toynbee Hall around 1955/56 teaching history. Whilst here, he met Rita Eldon, a woman who was teaching French. In their joint autobiography Rita wrote “Also teaching at Toynbee Hall that evening was Richard Pankhurst. As I was signing the register in front of him he caught sight of the envelope with Fabunumi’s [a student at LSE who used the Press Library where Rita worked] name on it. Richard had met him at LSE and asked me how I came to know him. The Toynbee Hall Registrar…then introduced us – and that was the beginning, but by no means the end of my acquaintance with Richard.” In 1956, when Emperor Haile Selassie invited Sylvia Pankhurst to move to Ethiopia, his Imperial Majesty also offered Richard a post at the new university in Addis Ababa. They decided to go and Richard asked Rita to go with them. They were married the following year.

Also around 1956, Margit Tischer, a young German student, came to work at Toynbee Hall as a cook.  She remembers: “The big problem though was a constant visit of lovely young chaps, asking if we needed help or could they taste the cooking, to make sure it was good for the ordinary Englishman… could a young woman imagine to have landed at a place with 40 highly educated, eligible young men? It was, to say the least, fun. I was never treated as a foreigner, always as a competent woman, friend, sister, and I was happy to say that my two kitchen workers were also treated with appreciation, and love.” Two fun young gentlemen in particular stick out in Margit’s memory having met them on her first day at Toynbee Hall: future musical television pioneer Jack Good and his close friend the actor Trevor Peacock. Before long Jack proposed to Margit. Soon after “Jack and I secretly got married at Stepney Town Hall, with only Trevor and a girlfriend and one other couple…present. With a bottle of cheap champagne at the pub across the road afterwards…When we came back to Toynbee after the wedding and announced with an embarrassed ‘guess what’ that we just got married, there was a shocked silence and then an almost angry roar, nobody had expected it, but the worst was that we had cheated them out of the most amazing party of the year.”

I can’t remember how I came across a reference to Toynbee Hall in the film director Stephen Frears’ oral history interview in the British Library’s archive. However, in it he mentions that his parents met at Toynbee Hall! In the interview he says: “…he met my mother when he was working at Toynbee Hall, which I know very little about except I imagine it was some sort of social work but why he was there I don’t know. And then they got married and went back to Leicester where he was a chartered accountant in the family firm before the war.” From my research, his father was a residential volunteer here in 1931-1932. Hopefully one day I will get the opportunity to find out more from Stephen.

I am certain that there are many more stories of romance at Toynbee Hall, I certainly know of at least a couple more. If you have a story to share please get in touch via archive@toynbeehall.org.uk.