“This crisis has taught us that lack of preparedness gets you killed”: Ann Pettifor’s talk on Covid-19 and Green New Deal 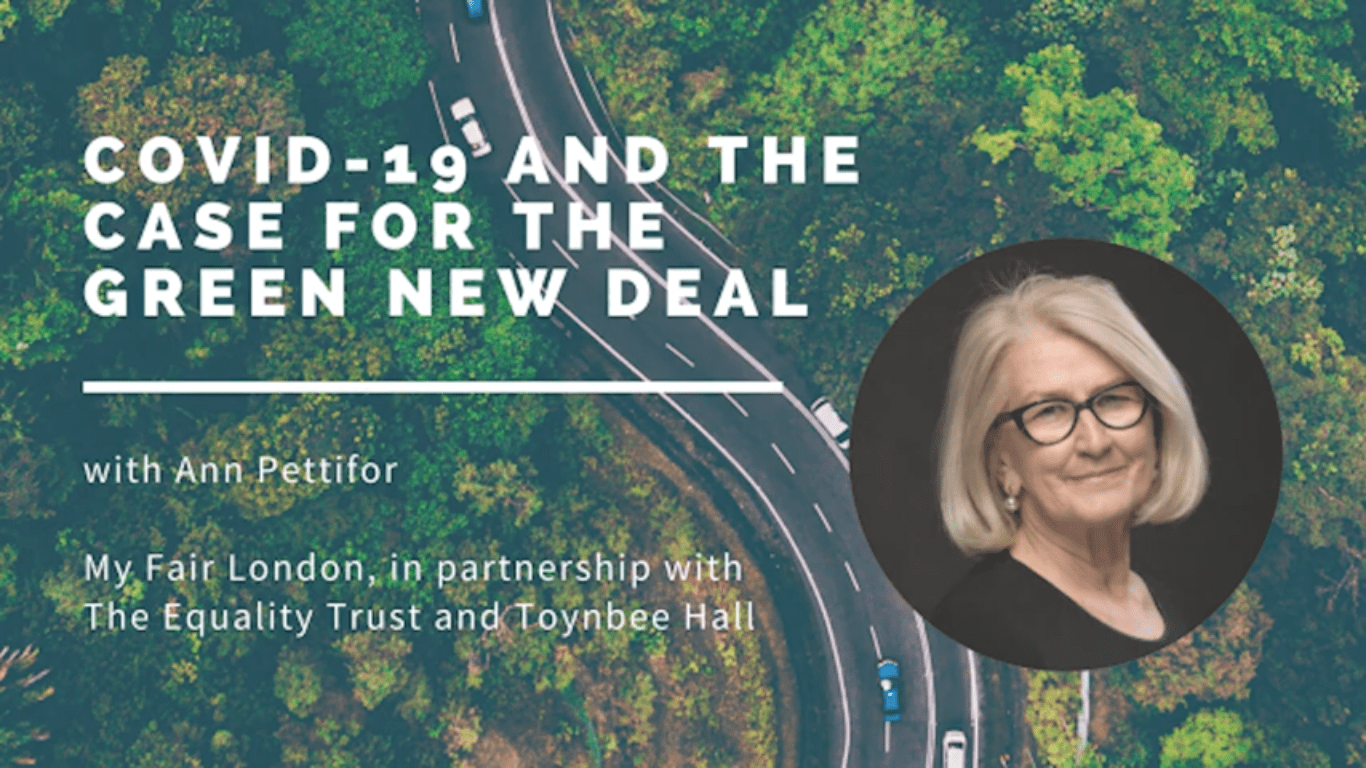 Extracts from Ann’s talk on Covid-19 and the case for a Green New Deal, organised by My Fair London, The Equality Trust and Toynbee Hall.

Climate breakdown is going to be global. And according to the political economist and author, Ann Pettifor, Coronavirus is teaching us that “we don’t know how to cope with global crises”. Below we offer some extracts from Ann’s talk on Covid-19 and the case for a Green New Deal, organised by My Fair London, The Equality Trust and Toynbee Hall.

At this moment, it is the poorest countries have faced the biggest threat from coronavirus. They have the least resources – the lowest resourced public sector, health systems, millions of people live in cramped conditions on poverty wages. […] The international system and the way it has operated over the last few weeks has absolutely clobbered those countries.

In South Africa, the minute the pandemic appeared, speculators, creditors and investors stampeded out of the South African economy but also out of most poor economies, emerging markets and flowed straight to the United States, to the dollar. That caused poor country’s currencies to crash and the value of the dollar to rise. And the debts that poor countries owe the rest of the world is denominated in dollars, so the cost of their foreign debts rose. And at the same time their currency fell, increasing the cost of imports, especially pharmaceuticals imported from China or western countries..

Simultaneously commodity prices fell, that is prices of the products poor countries export or sell to finance imports. Then Western rating agencies moved into town and because investors had fled the country, they downgraded low-income economies like the South African economy. Downgrades mean that foreign lenders to the country have to raise interest rates, increasing the cost of borrowing. That made it harder to borrow money, especially hard currency, and hard currency is vital because you can’t pay for pharmaceuticals with currencies other than US dollars, […] to buy vital equipment and drugs that they needed. So at the very minute that they were hit by a pandemic, they were also hit by a financial shock. […] That happened not because the South African economy had collapse; it happened because the international system is designed to suit the owners of capital. And for creditors, investors and speculators to do as they will, at a whim. If they fancy leaving South Africa overnight, that’s considered fine, that’s what the system encourages them to do. To prioritise the interests of creditors, investors and speculators.

What this teaches us is that if we want to deal with inequality, we must deal with the international system, that facilitates the priorities and interests of the  1% […] Our current economic system is designed to enrich people thaown assets..The international financial system is structured to give preference to those who own assets. Assets include stocks and shares, government bonds, property, intellectual property, works of art, race horses etc.. […]

It’s that system of collecting rents from assets that has enriched those who own assets, and worsened inequality.. To understand this,  think about those who are able to rent out properties. They own a property, they own a pre-existing asset (e.g. an old Victorian property in London, built long ago) so they do not take the risk of investing in the creation (building) of the asset, but are able to effortlessly earn income by renting out that asset, and do so effortlessly.

Whereas if you don’t own an asset, if you live in a council house or rented accommodation, then you just don’t have the same power to earn income effortlessly ..that is,  without doing very much. It’s that societal divide between those who own assets and earn rent, and those who don’t own assets and live from precarious incomes,  that in my view explains, and has exacerbated, inequality in our society. […] Today the international  financial system is structured to give priority to those who own assets, including financial assets (government bonds, corporate debt, stocks and shares).

The Green New Deal (GND) was published by a small group of us  in 2008 with the New Economics Foundation. We launched it in the middle of the Great Financial Crisis (thinking that gave us an opportunity to think big, and different) and at a time when many people working on the environment were prioritising individual or community and social change. What we, the authors of the GND absolutely insisted onl was structural change. We also wanted to bring together, unite progressive economists with green campaigners and ‘green’ entrepreneurs; we wanted a Labour plus Green alliance..

We wanted to make very clear that the economic system is integrated with, and is the reason for, the state of the ecosystem that we are in. So in order to protect the ecosystem and society, we need, we argued, to change structural arrangements for the economy. To avert the climate crisis and tackle inequality domestically and globally, we are going to have to re-structure our economies, to make them less exploitative of low income countries, and to be more self-sufficient. John Maynard Keynes argued “Ideas, knowledge, science, hospitality, travel–these are the things which should of their nature be international. But let goods be homespun whenever it is reasonably and conveniently possible, and, above all, let finance be primarily national.” We have, for example, to end forms of trade that lead low-paid women in Kenya to drain their own water tables in order to grow green beans, that are then flown across the world to consumers in Britain. We are going to have to learn to grow our own green beans, so to speak, to eat locally, to eat seasonally. Of course we will continue to trade, but greater self-sufficiency wherever possible will constrain airline flights, shipping and exploitation of poor countries.

On ensuring that everyone has an income

The only way to pay for the enormous economic outputs we are spending at the moment during the crisis, and will need to spend in the future is through employment. Employment generates income – both for individuals and households – but it also generates income for the Government, in the form of tax revenues. When the Government’s books are unbalanced, that is because the economy is weak, as now, with low-paid, insecure, zero-hour work – which does not generate enough income for individuals, or enough tax revenues for the state.  I would like to see a world of full employment, where the Government’s ‘books’ are balanced by  tax revenues from full employment.

In order to survive climate breakdown, we are going to have to change our energy system, our transport system, our land system. We are going to have to substitute labour for fossil fuels. We are going to have to cycle more, and use petrol-driven cars less. And yes, there’s an awful lot to be done! Requiring the creation of millions of jobs. The Government needs to invest in alternative energy, transport and land-use systems so that people can make better energy, transport and other choices. The private sector will benefit from this public investment, and labour would be fully employed – particularly in the sectors that do not generate emissions…for example, caring, education, the arts and culture.

The reason I am opposed to the notion of a basic income is not only that it would cost the state huge sums; but mainly because I am convinced a green economy is a labour intensive economy. We have to give up fossil fuels for labour. A lot of that work will be non-toxic emission emitting, and we will need workers. I bet those 3,000 employees laid off by Virgin Atlantic have many of the talents desperately needed by society: diplomatic, communication and human relation skills. We need full employment,  better quality work, strong trade unions, and Universal Basic Services, in my opinion, not Universal Basic Income.’

Ann offered three actions that we could take to move closer to a Green New Deal.

2.     Acting individually is not enough. The most important action people can take is to get political. Those with green politics need to be interested and fight for political power.

3.     Educate and inform the people around you. There is power in education, but you need to know your facts and have a clear and specific understanding of what needs to change.