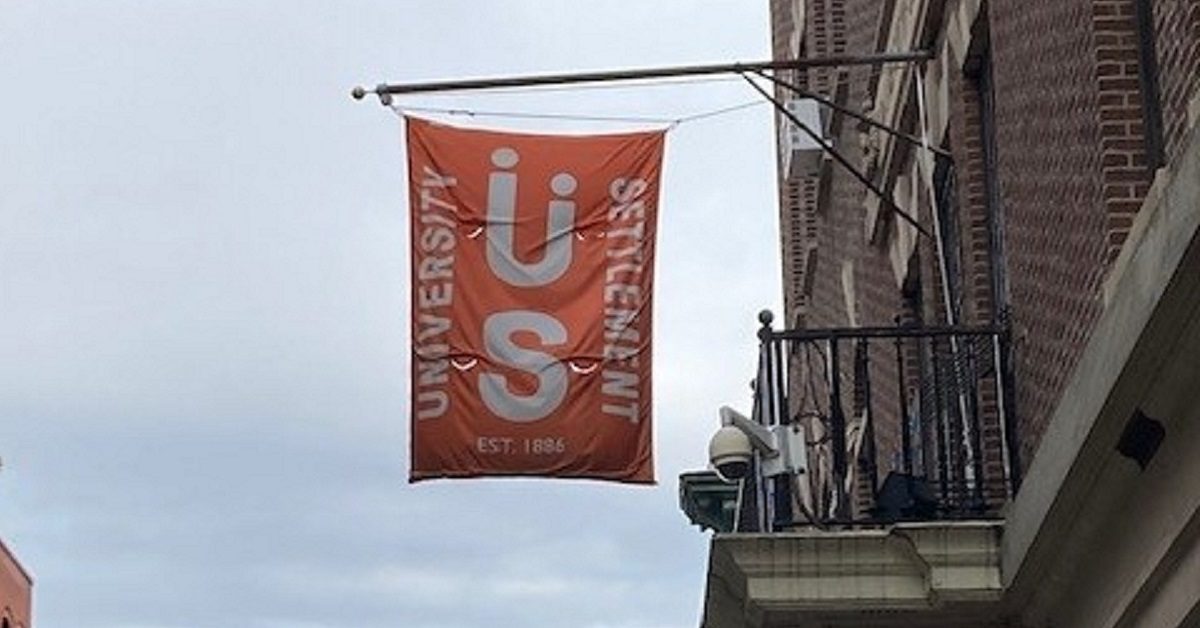 At the end of February I was lucky enough to be in New York City. To be travelling again felt a real privilege given the times we have been through; and I felt very fortunate indeed to have the luxury of being able to take some time off when in the UK so many people are struggling with the cost of living crisis; and of course with the awful and almost overwhelming news coming out of Ukraine as the war there intensifies.

My visit was a holiday, but I took the opportunity while I was in the City to visit one of Toynbee Hall’s oldest friends, the University Settlement community centre, in the Lower East Side, which was established in 1886, just two years after Toynbee Hall, and inspired by a visit a group of Americans made to London’s East End soon after we opened our doors.

It was an incredible experience; in some ways so different; yet in many so similar. Before visiting, I’d had a look at their website and watched a short film which the University Settlement team had made about their story, and in particular the experience of the community and their organisation through the pandemic.

The experience and the voices reflected in the film had so many parallels with how things have been for us in East London: the huge sense of always being there for people; the diversity of the team and the community around; the sense that through the most challenging of times, they would continue to be there for the community and adapt as much as they could; and the pressures and impacts, on wellbeing, health, finances and community resilience that the team and their friends in the neighbourhood had to deal with.

Meeting the Chief Executive, Melissa Aase and some of her team was a great opportunity to share and listen to how this response had been first hand, and some of the challenges and opportunities that – in places thousands of miles apart – that we both faced.

We seemed to share very many things, despite this distance: the overriding sense that first and foremost the connection to the communities we work with is the most important thing. The walls of the Settlement are covered in creative works by young people and older people, who use the spaces as somewhere they can express themselves, articulate what they want and need and demonstrate their aspirations.

The centre serves food, hosts outreach teams, supports numerous strands of activities, in the immediate local neighbourhood, and in a wide range of outreach locations including schools and other public buildings and places.

The community itself – on the lower East side – is, like our own neighbourhood in Tower Hamlets, a place which over the years has undergone huge change. When the Settlement was established the area had a huge population of Eastern European migrants – many of them Jewish people, and across the area there are many synagogues and strong remnants of that culture. Later, some of the area became – and still is – known as Chinatown, welcoming large numbers of families from the Far East, many initially becoming employed in the garment industry that was the heart of the economy for many years. Now the neighbourhood hosts a huge variety of thriving and long established businesses run by members of that community.

The community has also enjoyed a rich history of Latinx neighbours (primarily from Puerto Rico, Dominican Republic and various Central American countries), and a long history with African American neighbours, which is a heritage that is more and more being shared, studied and celebrated. A local museum, the Lower East Side Tenement Museum or example, celebrates this history within one of its new walking tours.

The ways that University Settlement has adapted its work and programmes to always try and welcome people from different communities – with a staff team directly drawn from the local population – is a really important part of the story.

More recently, the area – again like East London – has undergone significant development; older tenement buildings have been replaced by shiny tower blocks. Melissa and her team do their best to make a positive difference to this development, and they were proud to tell us of the impact they’d had in securing affordable housing and discounted rates for local traders in the redevelopment of the historic Essex Market (a lovely combination of food and craft halls with open mixing space well used by the community).

There are challenges of course: they told me of the community concern around plans for a large scale homeless shelter. The community totally appreciated the need for support for homeless people, and indeed have made the case for better housing consistently. But there was apparently some real frustration that the local authorities were appearing just to push the problem of homelessness into an already poor and hard pressed community, without acknowledging the needs of that community, or their anxieties and concerns.

Helping people navigate these challenges – as well as the everyday need for food, health and wellbeing and educational and social support – felt very familiar to the context in which we operate.

As did some of the other challenges: we talked about funding, and the juggling act of making multiple funding streams for discreet purposes try and add up to something holistic; the sense that community organisations are the ‘glue’ which often holds bits of a creaking state support system together; and the very real challenge of how – when need is mushrooming and people are really struggling – you prioritise and, with regret, learn to say no to things.

After an inspiring morning at the Settlement, I left Melissa to get on with her day – which included a celebration meal with a team member who had been making food for the local community for over thirty years and was now at the point of taking a well earned retirement. But there was clearly an expectation that they would stay involved and connected in some way! I took the chance to visit the Tenement Museum later that day, and found that experience even more powerful having heard from Melissa and her team.

The world does often feel a hugely challenging place. And the concerns we face in our own lives and communities can be so significant that events far away – such as the terrible trauma in Ukraine – can make us feel a real sense of fear and despair. But I felt after visiting the University Settlement even more assured that, even in a very different city, many miles from East London, there are many more things that hold us all together, and that the strong spirit of the settlement and community movement, in which Toynbee Hall has always played such a strong part, is absolutely vital to us being able to strive for – and achieve – a fairer and happier future, wherever we are.