“The solutions are simple: we need young people to be given the same sized megaphone as their adult counterparts.” 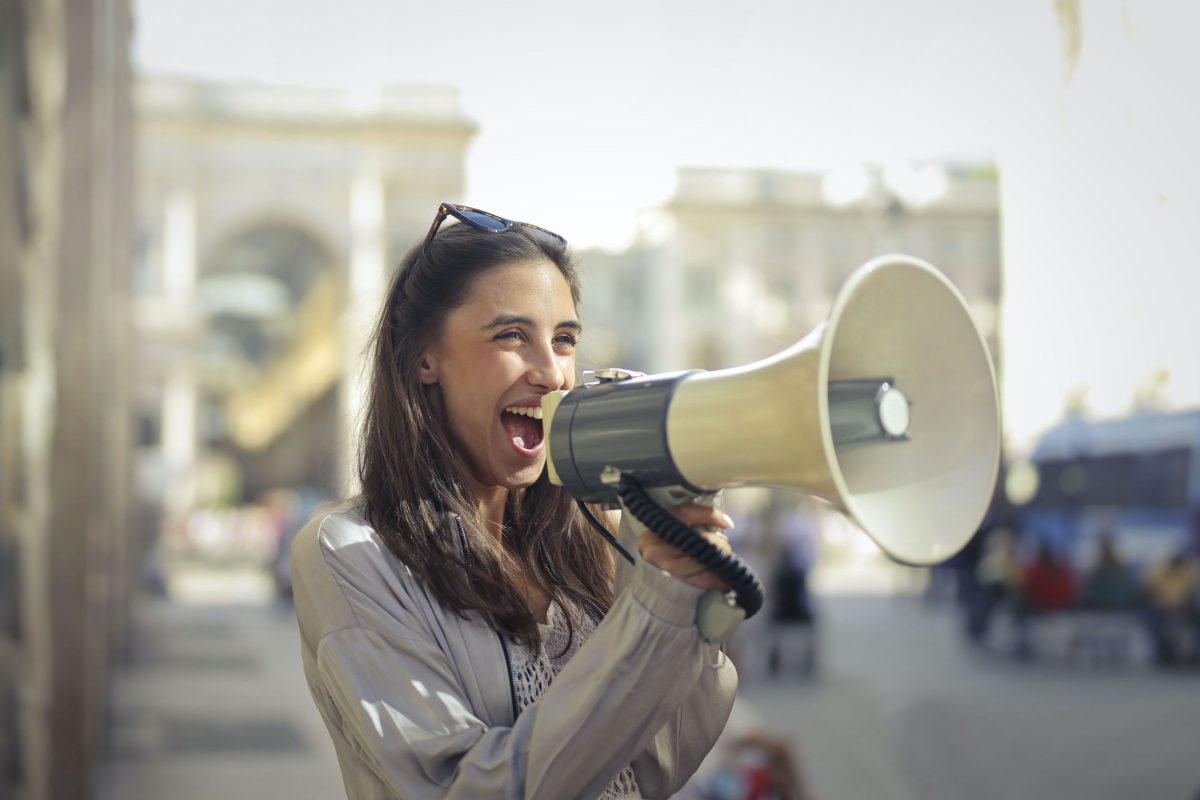 We invited young activists from our youth activism project, When We Speak, to tell us about the impact that Covid-19 has had on their lives, and what people with power in education and local and national government could do better.

Lottie describes the injustice of young people’s voices being systematically excluded from the political sphere – from Covid-19 government press conferences to the restrictions put on young people’s voices because youth organisations are required to be non-partisan. D. talks about the anxiety caused by the crisis, and the pressure to be seen to be productive rather than to acknowledge that our mental health is suffering. Finally, Adeline offers a blistering assessment of the government support response, and makes a strong call for the government to listen to people who are affected by the crisis when making decisions.

Too Silly, Too Naïve, Too Young – Lottie Cooke

It was just Monday when I was scrolling through Twitter, a warm mug of tea in my hand and a fluffy dressing gown wrapped around my body, when my cosy evening came to an abrupt stop. Alicia Jones (age 16), Member of Youth Parliament for Thurrock, had tweeted how her question on gov.uk/ask had been revoked because “You cannot ask a question in the coronavirus (COVID-19) press conference because you are not old enough”. It seems as if the UK government has come to the ludicrous conclusion that being a young person directly correlates to having a lack of legitimate concerns. A lack of understanding. A lack of human rights.

To put into perspective how literally our human rights have been revoked, I would like to draw your attention to Article 12 of the United Nations Convention on the Rights of a Child. It states that “parties shall assure the child who is capable of forming his or her own views the right to express those views freely in all matters affecting the child”. It is blatantly clear to me that the UK government has clearly breached Article 12, stripping Jones and thousands of other young people of their rights to express their views.

Jones tells me that this happens far too often. In fact, when I asked if she had experienced authorities putting a metaphorical piece of gaffa tape over her lips previously, her immediate response was “Oh yeah!”. “You can ask any young person who is involved in a youth voice organisation or has a youth voice role and they can probably give you a long list of experiences where someone has said, no, you’re too young”. I pondered upon this for a minute, thinking “Hang on, doesn’t this completely eradicate the point of a “youth voice organisation”. Aren’t you then taking the “youth voice” out of “youth voice organisation”? I then had to remember that as 17-year-old women, this minute or two would likely be shut down by many authorities, another breach of that critical Article 12.

Before continuing, I would like to clarify that I am not taking away from the incredible work youth voice organisations do. Being involved in so many myself, I have had countless wonderful experiences connecting with passionate young people and kind adult mentors and allies who have helped guide me to become a more confident, out-spoken and opinionated young person. What is critical to the downfall of many of these organisations is a simple factor of the non-partisan agreement. For those unfamiliar with the term, “non-partisan” refers to a set-up that is free from party-affiliation, designation or bias. Many YVOs receive funding on a non-partisan basis, meaning that the young people they work with are limited as to what they can say, as to assure the company is not breaking this agreement. The blame is not to be placed on these organisations but rather – you guessed it – our government.

I would be naïve to say that youth are the only silenced group. In actual fact, different intersections of silenced youth came up in my conversation with Jones, a young carer, who explained to me the issue many young carers have. “I know many young carers who have been shut down when their parents are taken into hospital and they have tried to make a point because they are not allowed to share medical records”. It is baffling that this can be used as an excuse. Of course, there is lots being done to train healthcare professionals into a better understanding, but clearly more needs to be done. Along with young carers, there is an extortionately long list of other intersections of silenced youths and an even larger list of silenced groups in general. It is quite a scary thought.

Internationally, however, some countries have started doing their bit in taking out their ear plugs and listening to their nation’s young people. Finland is one that sticks out as being the most progressive, with a children’s coronavirus conference held on Friday 24th April. Children aged between 7 and 12 had their burning questions answered over video chat by the Finnish Prime minister (Sanna Marin), the Minister of Education (Li Andersson) and the Minister for Science and Culture (Hanna Kosonen). The conference was also prefaced, much like the UK’s, with a general update on the current situation, however presented in an accessible manner for the younger age group. Jones and I are hoping that our government follows suit, laughing as she mentioned “considering this scandal that has just erupted, it would make them look a lot better”. Of course, we were being facetious, as it should be the bare minimum to allow UK youth a say in everyday conferences, before even thinking about holding a separate children’s one.

I am aware that the past 798 words have been focused on pinning down the problems with little attention given to the solutions. The solutions are simple: we need young people to be given the same sized megaphone as their adult counterparts. We need to be in the room, voicing our concerns and we need others supporting and representing us when that room remains locked to under 18s. That means, as well as a say in the coronavirus conference, we need a say in all aspects of our social and political climate. We desperately need a Youth Minister to be appointed to represent us in locked rooms and unlock the doors that should, at a bare minimum, be open to us. Adults: you have the power and the platforms to make this happen. Sign petitions, support YP-led initiatives, and start a conversation with your local MP and government officials. Change is already happening, and it is incredibly important to support and exciting to see.

I hope this piece was able to prove to you that young people have legitimate concerns. Young people have an abundance of knowledge and understanding. Young people deserve to receive access to their basic human rights. If anything, we are far from too silly, too naïve and too young.

In Defence of Feeling – D Shorinde

Apparently, I’m too sensitive. I’ve often been told that my emotions cloud my clarity. This once happened in the common room of my fourth year dorm. I was arguing with another student who was convinced that any talk of emotions would undermine the conversation – so much so that he winced everytime I said the words “I feel”. We ended our heated argument agreeing to disagree, while tight smiles failed to hide a new found distaste for each other. There were many other reasons for us to not get on very well so I found it surprising that my being emotional was the symbolic ‘nail in the coffin’.

Regardless, here I am making my case to you all once again. I spent the better part of my weekend in a haze, trying to find something that would lift my mood. I whizzed around my room on my new roller skates and ate what was left of my spiced lemon cake. Nothing I did helped me avoid the deep anxiety I felt at the base of my stomach. What I should have done is feel, every knot and pit.

I’ve always thought that sensitivity can be a superpower. At a time like this, where the word “unprecedented” has dominated media coverage of COVID-19, many of us are not doing very well. Baking a cake or learning a new skill sounds a lot more enticing than feeling our feelings. However, I think that’s part of what we need to do. You may not be ok right now – who could blame you? These are uncertain times. Now more than ever, it’s important that we listen to our hearts – even if they hurt.

Nationwide clapping is not helping – Adeline*

On behalf of the elderly that can’t enter the supermarket without seeing empty shelves, on behalf of the vulnerable homeless citizens who have no place to call home, on behalf of the key worker families that won’t see their fathers and mothers till 4 am, the enraged young people ask the Government, what have you done to help?

Nationwide clapping is not helping.

Speeches of ‘comfort’ do not help.

It should bring utter shame to the UK Government for their tactless strategies.

Hundreds of volunteers have brought more aid to those in need than the UK Government has since the first outbreak was reported.

Our bus drivers, supermarket staff members and most importantly the NHS staff are in desperate need of vital personal protective equipment! The UK has one of the highest numbers of reported cases in the world, yet the UK Government has tragically failed to provide the bare minimum.

So, what HAS the Government done? Other than telling us to stay at home, which is common sense, have they managed to meet the well-being needs of people at home? Yes, the people at home are at less risk of contracting the virus which benefits their physical health. But what about those facing mental health and emotional well-being issues? Those that are victims of domestic abuse? What about the young people that have been told they are not at risk?

People NEED accessible online services to put their worries at ease. An insightful chat with a health advisor can make a difference. To improve the current situation, there need to be surveys sent to every UK citizen which can allow them to suggest what has to be changed.

Give the people a bigger voice, a bigger say in what needs to be done, only then we can TRULY save lives.

The above pieces are unedited submissions from young people. Toynbee Hall, like the youth organisations mentioned by Lottie, is a non-partisan organisation. However, we believe that the inequalities faced by young people cannot be overcome without listening and acting on what they have to say, and that editing young people’s voices risks perpetuating their exclusion from decision-making. While the views expressed in this article do not necessarily represent Toynbee Hall’s position, they do need to be heard.

*Author has requested her name is changed